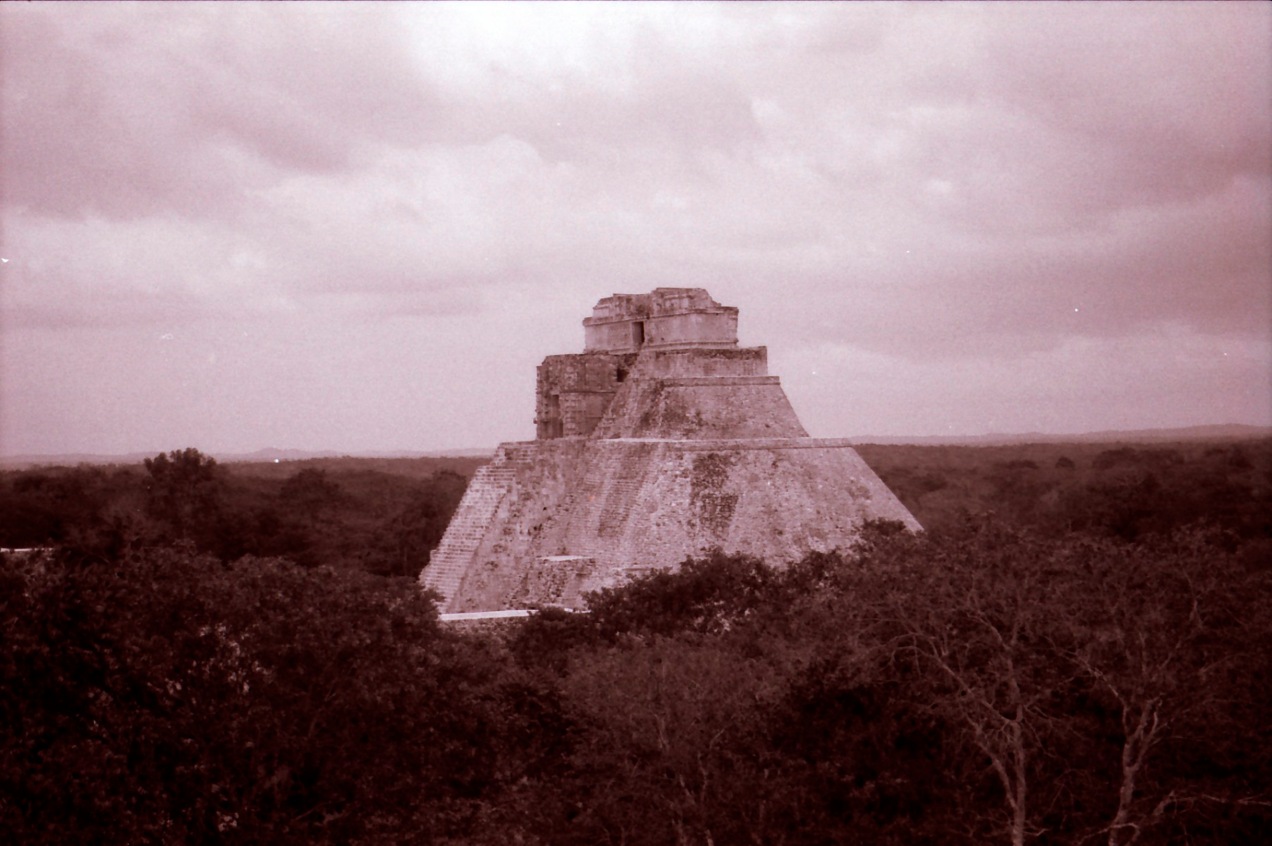 This is the third in a series of articles that explores the philosophic and spiritual concepts of the Classic Maya.

At the Mayan site of Uxmal the top of a mammoth pyramid rose above the surrounding jungle like an apparition; magnificent, eerie, and captivating to the imagination.  A gentle rain in the night had sweetly scented the air, and by the time I’d dressed and eaten, the clouds had passed leaving everything wet and clean; the dust settled on the dirt paths that lead from one part of the ruins to another.
The city of Uxmal, meaning the place of plentiful harvests, was inhabited from 100–1000 AD and was rebuilt five times with a population at its height of 20,000 people.
Comprised of seven separate groupings, the surviving buildings were located on a broad plateau.  As I’d seen at the nearby sites of Sayil and Kabah, the architectural style was unique and distinguished them from other areas of the Yucatan; long and low with exquisite proportions, decorated with elaborate ornate carvings of Puuc the rain god and several other deities. 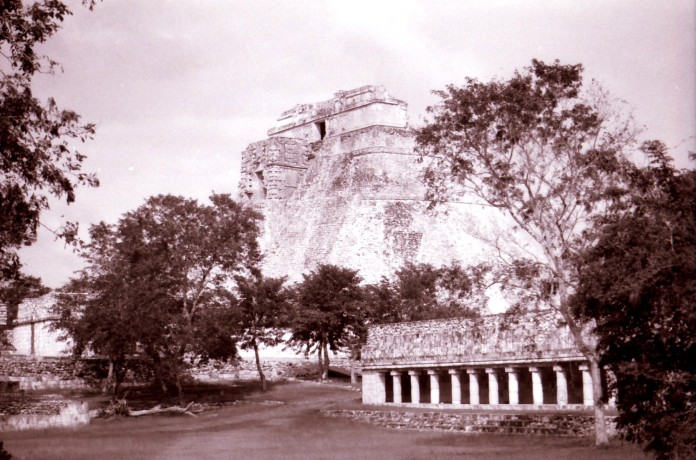 “The Nunnery Quadrangle,” named by a 17th century Christian priest for its resemblance to the cloisters of Spain, is now believed to have had  various civic and religious uses by priests and dignitaries of the city.  The quantity of divine symbols in the friezes and excessive number of Chaacs – the rain god — speaks of sacramental spaces.  Faithful to the design of the other ritual buildings of this site, the quadrangle was the most outstanding with its elaborate ornamentation and long low design.

Little is known about the people who lived here and their unique history. The ruins themselves speak of a culture that was highly religious and ritualistic, who lived according to the ancient books of the Classic Maya, but beyond that, we don’t know.  I found myself remembering the Mayan creation stories I’d found in the Popul Vuh and the Books of the Chilan Balam. Here is an excerpt:

“In the beginning the two who came first from the one made the gods of the four directions and joined the two of heaven, and the six together created the seventh who is ‘heart of heaven’.  Thus co-creation began and all else came forth from this co-operation.  The word was spoken and action arose.  It was green.

In the first stage the earth,

plants and animals were formed and multiplied.  However the animals could not speak, but could only squawk and run about madly, could not name the gods who created them, could not honor and praise them, and so their flesh was brought low, they were eaten, they were killed — the animals on the face of the earth.

In the second stage,

The Makers experimented with the human work and built them of earth and mud, but it did not look good to them; it kept separating and changing, it could only mimic, it could not create.  No words of praise came forth from their distorted faces.  The days of the gods were not kept by them.  They were insufficient and therefore were dismantled.

In the third stage

the gods were successful in fashioning a human who could sustain its form.  They were carved of wood and were led by the grandmother, the daykeeper, and by grandfather, the master of coral seeds.  These could multiply, but there was not enough in their hearts, not enough in their minds, no memory of their mason and builder.  They did not remember the ‘Heart of Sky’, but only knew the grandmother, ‘Heart of Lake’.  Again a great destruction was made; a dismantling of the creation.
This was when there was only a trace of dawn on the face of the earth; there was no sun.  To this time and place there came the great warrior twins, the redeemers of mankind, Hanahpu and Ixbalamka who would transform the creation from the third to the fourth stage.”

The stories that describe stages of creation were consistent with the philosophic understanding that life is dependent on the creators and that the creators expect something in return.  At the height of the Mayan civilization a great deal of attention was given to the gods, and Uxmal, like other sites, was where the people came for rituals to honor them.

Together with others who had come from the far corners of the world to see this magnificent site, I realized the honoring was still taking place. Maybe it was not with the same understanding, but we did gaze in awe and wonder all the same.

Here at Uxmal the separate groups of buildings were positioned in relationship to one another in intricate geometric patterns.  It was truly a marvel to see and one wondered at how such a marvel was accomplished in a place where there were no mines, no metal tools, no dray animals, and the wheel had not been discovered.  The wheel issue was another of the Mayan mysteries; for a people that charted the heavens without the aid of modern instruments, that came up with the concept of zero and were brilliant mathematicians, why did they have no concept of the wheel? 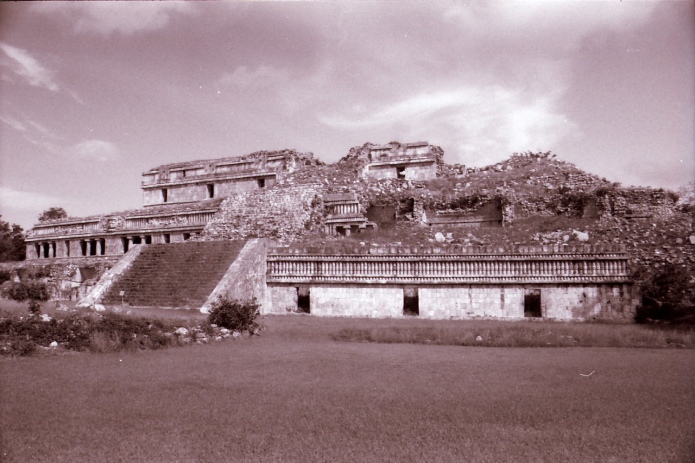 As I approached The Temple of the Magician, whose top I had seen from my room at the hotel, it was  forbidding with its 118 steps leading to two platforms. The gargantuan size would have certainly impressed any visitors at any time.  Five superimposed temples, each embedded in the other and added in different periods, made up the temple.  At 114 feet, it was the second largest pyramid in the Yucatan. 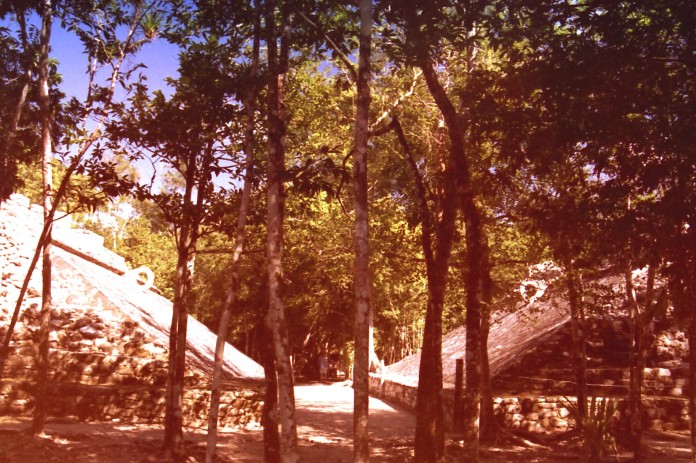 Most Mesoamerican cultures played a form of the ballgame, and I was anxious to see Uxmal’s ballcourt.  111 feet long and 32 feet wide, its sloped walls ran the length forming a platform at the top for spectators.  The equipment for the ballgame varied through time and space but generally consisted of a rubber ball and heavy padding for the players.  Two teams of 2 or 3 players each competed to pass the ball through a ring suspended high on one of the walls of the alleyway.  The players controlled the ball by hitting it with the upper arm and thigh; no hands could be used.

More ceremony than sport, the ballgame was another of the Classic Maya’s symbolic aspects; the struggle between day and night, dark and light, consciousness and the unconscious.  A metaphor for the movements of heavenly bodies, particularly the Sun, Moon, and Venus, the ball itself may have been understood as the sun journeying in and out of the Underworld, seen as the narrow alley of the ballcourt.  The most well documented description of the importance of the ballgame to the Maya was found in the Popul Vuh when the redeemer twins, Hanahpu and Ixbalamka must play the game with the lords of the Underworld to bring about the fourth stage.

Again a time came, when there was not a trace of dawn on the face of the earth; there was no sun. The lords of Xibalba challenged Hanahpu and Ixbalamka to a ballgame in the underworld, which is not something that can be refused.

Excerpt from my novel, The Jaguar’s House.

Hanahpu and Ixbalamka climbed down the craggy cliffs to the catapulting river below.  After passing all of the tests put to them, they were put to the ultimate test; the House of Death where they would be sacrificed.  Here the ballgame was played.  Hanahpu lost his head, but with the aid of the animals and all allies of the earth, the brothers did utterly defeat the lords of Xibalba; because of superior knowledge they knew that death was a stage whose next step was rebirth, so when Hanahpu died, he knew he’d be reborn, and therefore was.
This feat was a miracle to the lords of Xibalba who believed death was the final frontier.  The lords were envious of this mastery and wished to participate and gain its power.  One Death bowed to them and said, “Please, sacrifice us, so that we may know this great truth.” Here the twins defeated them utterly, for when their heads were cut off, they could not reassemble themselves. They had no belief in transformation, and so were locked in the prison of their own minds; dead forever.

The game became the metaphor of life, death, and regeneration and the resurrection of the twins’ father, the Maize God, from the court of death. The principle ideas that form the foundation of Mayan thought were of stages, of a continual round of cycles of time, of transformation, and of the correct way to live in relation to the gods.  All of these concepts can be seen in this excerpt from my novel, The Jaguar’s House.”